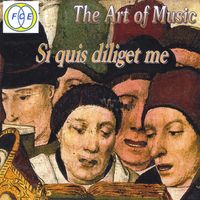 Josquin, Tu pauperum refugium. This was originally published as the second part of a longer motet, but the two sections appear quite alien to each other, so this was probably not the composer’s intention. ‘Tu pauperum’ consists mainly of chords, with relatively little independent voice movement, and treats the short lines of the text as separate phrases, divided from one another by rests, so the work is unusually simple in conception.